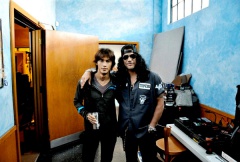 Koshi Inaba and Slash in the studio. Slash commented on the experience, saying: "Koshi was super professional and just came in and nailed it. He doesn't mess around—he's just very focused. He did everything he had to do to get it down to the way he wanted it. A very simple, very easy, painless experience." 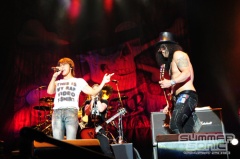 The two on stage together at SUMMER SONIC 2010 for a surprise live rendition of their joint single "SAHARA". This would be the only live performance of the song to date.

SAHARA is a single by American guitarist Slash featuring Koshi Inaba, released in Japan on November 11, 2009. The track was included in the deluxe edition of the former's eponymous album Slash released in March 2010. A special English version of the title song entitled "SAHARA (English Version)" was made available as part of the deluxe package and was released for those who pre-ordered the album as well.

The collaboration came about as a result of Slash being familiar with the work of B'z and Koshi's status as a top rock vocalist in Japan. After hearing their then-most recent work, Slash got in touch with Koshi and the two began work on the single together over e-mail. Upon release of the single, fans were unsure whether the two would ever have the opportunity to perform the song live together. These fears were abated when Koshi made a surprise appearance during Slash's set at the Japanese music festival SUMMER SONIC 2010 where the two teamed up for the only performance of the song to date.

The single charted at number four on the Weekly Oricon Singles chart in the week of release before finishing eighth for the month of November. Most notably, the single became the first by a foreign artist to finish in the top five in seven years on the Oricon singles chart.

All music composed by and guitar performed by Slash. First track's lyrics written by and its vocals performed by Koshi Inaba.

Slash Deluxe Edition on iTunes featuring both versions of "SAHARA"