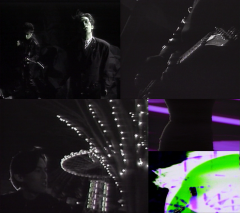 Various shots from the mostly monotone music video for "Kimi no Naka de Odoritai". The video features various video effects and quick shots as the band play on a singular stage.

Kimi no Naka de Odoritai (君の中で踊りたい, I Wanna Dance Inside You) is the second single by B'z, released on May 21, 1989. Both songs on the single were found on the band's second studio album, OFF THE LOCK, which was released the same day, as had been the case with the band's debut single and debut studio album. This practice would continue until the band's third single, which would again release the same day as their third album. The title song also served as the ending theme to TBS television drama Haimisu de Warukatta ne! as part of their Drama 23 programming block. This would become the first of many B'z singles to receive a tie-in with another promotion.

One year later, in June of 1990, B'z released an English mini-album that featured English versions of four previous songs entitled WICKED BEAT. One of the four included tracks was a remake of "Kimi no Naka de Odoritai" as "I Wanna Dance Wicked Beat Style". The song features an English rewrite of the original lyrics while retaining the same themes, as well as the first line of the Japanese chorus (Odoritai... kimi no naka de).

The song is amongst the least collected of the B'z singles due to a publishing rights issue with the band's former label. The band's first three singles, first three albums, and first mini album are still under the publishing reign of BMG Japan. After B'z had parted ways with the company, BMG released an unsanctioned compilation album collecting the aforementioned early works as Flash Back -B'z Early Special Titles-, which was not supported, endorsed, or acknowledged by B'z in any way. One year later, B'z released their own best-of compilations for their tenth anniversary: B'z The Best "Pleasure" and B'z The Best "Treasure". The two albums would go on to become two of the highest-selling albums in the history of Japanese music. In 1992, a karaoke version was made available on B'z TV Style SONGLESS VERSION. Finally, in 2013, all three of the original singles were released as the opening tracks on B'z The Best XXV 1988-1998, making their debut appearances on an official B'z compilation.

As one of the band's earliest works, the song has also become one of their most obscure singles. Upon release, the single did not chart with Oricon, leaving no data on sales generated. However, the full studio album released the same day, OFF THE LOCK, charted at #33 on Oricon's Weekly Albums Chart—a fourteen spot improvement over their debut. Five months later, B'z would receive their big break with the release of mini album BAD COMMUNICATION, which sold 87,000 copies and twice as many as their previous release. The next year, in 1990, B'z would chart their first number one single with "Taiyou no Komachi Angel" and begin their twenty-plus year reign of consecutive number one singles.

Although the title song was played often in their earlier setlists, it has not currently been performed live since early stops for B'z LIVE-GYM 2008 "ACTION", which was, at the time, the first performance of the song since 1991. Nearly three decades after its debut, a performance of the title song from B'z LIVE-GYM "Pleasure'91" was included as part of the B'z COMPLETE SINGLE BOX in 2017.