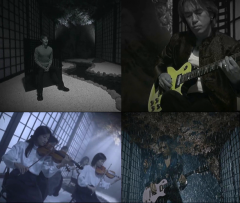 B'z as they appeared in the music video to "RING". Notably, both the only live performance of the song released on home video and the music video feature heavy downpours.

RING is the thirtieth single by B'z, released on October 4, 2000. The work was the band's fourth single of the year, following "Konya Tsuki no Mieru Oka ni", "May", and "juice". This marked the first occasion in which B'z had released four singles in a year since their break through year of 1990, as B'z has most commonly released between two and three singles per year. The title song was collected on the band's 2000 album, ELEVEN, and later B'z The Best "Pleasure II" in 2005. In 2013, it was collected for the second and last time on a B'z compilation when it was found on B'z The Best XXV 1999-2012.

The title song served as the theme to the NTV drama Ashita wo Dakishimete (Hope for Tomorrow) leading up to its release. Originally, the song was considered for the tie-in for the drama Beautiful Life, but as it progressed, the band decided to save "RING" and write another song more suitable for the drama, which became the mega hit "Konya Tsuki no Mieru Oka ni". There were considerations made to include "RING" in the aforementioned single, as either a B-side or even a double A-side, but it was deemed strong enough to stand on its own and was held back for a fall single.

Prior to being released as a single, "RING" was premiered live during the latter half of B'z LIVE-GYM Pleasure 2000 "juice". The tour in question has never been released in full on home video, but a performance of the single was one of those included on the live compilation B'z LIVE-GYM Hidden Pleasure ~Typhoon No.20~. The performance in question was backed by a strings section 28 musicians strong and was carried out in heavy rain. It is one of only a few performances available from the tour as of present. Additionally, the song has not been performed at a B'z show since the close of the tour.

A music video was prepared for the single with a distinct aesthetic, shot mostly in monotones with select colors highlighted, such as Tak's Canary Yellow signature guitar being highlighted, with more and more color being introduced to the video as it progresses. Notably, both the music video and its only live performance released on home video feature both a guest strings section and heavy rain. In order to promote the release further, B'z appeared on television four times to perform the song, with showings on CDTV, FUN, Report: Top 10 Songs, and Music Station. Additionally, the single's cover photograph was taken on the famous Nokonoshima Island in Fukuoka Prefecture.

When released, the singled debuted at the top of the Weekly Oricon Singles chart with over 400,000 copies sold in the first week alone. The single was certified Double Platinum by the Recording Industry Association of Japan, finishing first for the month of October in sales and thirty-seventh for the year.