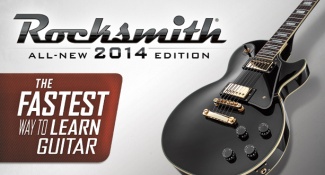 Rocksmith 2014 is a guitar-learning video game published by Ubisoft in October 2014 for Xbox 360, PlayStation 3, and PC. The game allows guitarists, both new and experienced alike, to use an included cable to connect their own guitar to use within the game. The game comes packed with mini-games and practice modes. The game comes packed with 55 songs by rock artists all over the world, including B'z and Tak Matsumoto, Aerosmith, Oasis, Boston, Bob Dylan, Def Leppard, Green Day, Kiss, Nirvana, Queen, Rush, The Police, The Rolling Stones, The Who, and many more.

For their contribution to the game, B'z have the original Japanese version of their 2001 single "ultra soul" included in the game. Additionally, Tak's solo song GO FURTHER from his 1999 solo album "KNOCKIN' "T" AROUND" is also available. The band's contribution to the game will be furthered in the future via downloadable content, with "girigiri chop", "Easy Come, Easy Go!", and "juice" all coming to the game's digital platform.

The game is set to offer a wide range of downloadable content from both artists included on the disc and offerings from others. Thus far, B'z have three songs that have been released worldwide on all platforms for download: