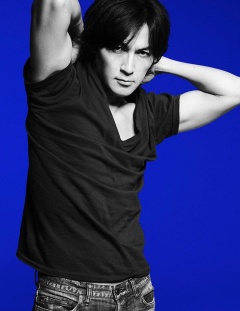 The promotional image included in various press releases around the announcement of "Hane".

Koshi as he appears in the short music video to "Hane". The video runs roughly two minutes and covers through the first chorus of the song.

A shot of Koshi during the full music video for "Suiro". The video featured Koshi suspended and floating in the back of a hauling vehicle as the camera slowly spins around.

Hane (羽, Feather) is the fifth physical and ninth overall single by Koshi Inaba, released on January 13, 2016. Its revealed came on November 23, 2015 during an event for the HMV-sponsored radio show Happy Hour! on InterFM897. Fans were invited to observe as Koshi participated in a live interview where the title song for the single was first heard by the public. The song fuses his signature rock sound with a Eurobeat foundation for a song unlike any of his past work. At the event, it was revealed that the song would begin serving as the theme to the popular anime series Detective Conan beginning January 9. This would be his second solo contribution to the series after "Overture" was briefly used as an ending theme in 2002.

The existence of the single came following the announcement of a new solo tour entitled Koshi Inaba LIVE 2016 ~enIII~. Plans of a solo project came to light even earlier, however, when it was revealed that Koshi would be providing the theme song to the latest Ryu ga Gotoku video game (localized as Yakuza in Western territories) which would become known as Ryu ga Gotoku Kiwami—a remake of the first game in the series for PlayStation 3 and PlayStation 4.

The single was announced with three different versions available across various formats: a CD only edition, a limited edition with previously unreleased concert footage from earlier dates of Koshi Inaba LIVE 2014 ~en-ball~ available on either DVD or Blu-ray, and a special Ryu ga Gotoku Kiwami-themed edition that does not feature the normal limited edition's contents and instead replaces them with an interview with the game's director and a music video for "Receive You ［Reborn］"—a remake of a song featured in the Ryu ga Gotoku franchise. The latter edition comes packaged with both a DVD and a Blu-ray, though the contents are the same and are provided in both formats as a convenience. Notably, this would be the first Koshi Inaba or B'z single or album to be issued in DVD and Blu-ray limited editions simultaneously. Prior to this single, the bonus discs for various singles and albums for both acts had previously been issued only on DVD.

On December 25, 2015, Koshi appeared on Music Station to perform "Hane" in full for the first time, with once longtime B'z support member Akihito Tokunaga joining him on bass who also contributed heavily to the four track single. Tokunaga was responsible for collaborating on all four songs' arrangements while playing bass, along with contributing guitar, keyboards, and mandolin to varied tracks. Simultaneously, the B'z YouTube Channel was updated with a two minute music video featuring Koshi against a white backdrop as an animated story plays out in numerous segments.

Koshi made a further television appearance for a two hour special broadcast of the variety show SMAP x SMAP that was hosted by members of pop group SMAP. The show typically features a guest artist that is interviewed by the members before joining them on stage for a collaborative performance. Koshi appeared for a brief discussion with the group before a performance of "Hane" in which SMAP provided occasional backing vocals. Takuya Kimura of the group is known to be a friend of Koshi's, who previously appeared in the 2000 television drama Beautiful Life for which B'z single "Konya Tsuki no Mieru Oka ni" served as the theme song.