Into Free -Dangan- is an English digital single by B'z, released worldwide in over fifty countries on April 4, 2012 via iTunes. The song is an English remake of the 1998 single "Samayoeru Aoi Dangan", with an entirely new arrangement and a substantially altered composition. The song was first premiered live the previous summer during the band's return to North America during B'z LIVE-GYM 2011 -long time no see-.

On February 1, 2012, a joint announcement was made with video game company Capcom stating that "Into Free -Dangan-" would serve as the global theme to the upcoming game Dragon's Dogma. Simultaneously, the official B'z website was updated with a sample of the song now serving as the intro video. Shortly thereafter, a trailer with footage from Dragon's Dogma was released with a shortened version of the song playing alongside scenes from the game.

The song was included as part of the band's self-titled English debut album as the final track, released worldwide on July 25, 2012 on the iTunes Store. 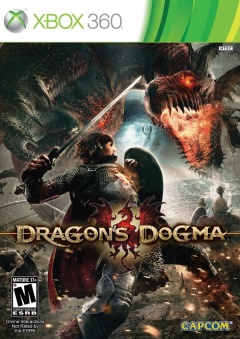 Cover to the North American version of Dragon's Dogma, for which "Into Free -Dangan-" served as the global theme. Given that the song was included in all editions around the world, an entirely new audience was exposed to B'z music for the first time.