Sekai wa Anata no Iro ni Naru (世界はあなたの色になる, The Color This World Will Take Depends on You) is a digital single by B'z, released only in Japan on October 4, 2016 via the Japanese iTunes store and all other major online music retailers in the country. While B'z has had digital endeavors such as the 2012 globally-released English album, its corresponding digital single, and the earlier 2007 International EP, this is their first Japanese digital exclusive single, although Koshi Inaba has used the format successfully for his solo projects beginning with "Nensho" in 2014. The following month, the band released "Fukiarenasai" as second Japanese digital exclusive single and third overall for the format. Later, in June 2017, the song was released as the third track on the double A-side single "Seimei/Still Alive".

The song was first unveiled at the end of February 2016 when premiered during a trailer to the twentieth film in the Detective Conan franchise, The Darkest Nightmare. The song would serve as the theme to the film and months later as the opening to the television series.

As revealed in Be With! after its release, the song was made available as a digital exclusive single due to the band's ongoing solo commitments. B'z felt releasing it digitally was the ideal move at the time, given it was not the right moment to come back big as B'z and that releasing digitally would require less footwork. 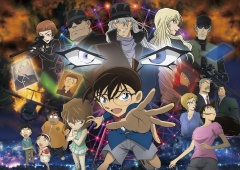 The song was written to suit the twentieth Detective Conan film entitled The Darkest Nightmare, for which it served as the theme. B'z explained the darker and harder sound by stating, "This movie focuses a lot on the darker parts of Conan's story and thus we made the theme song with a different feeling."