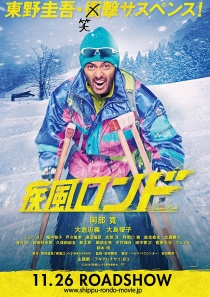 The song was written for the film Shippu Rondo. At release, the band released a message partially stating: "While it is an action movie that has its extravagant and sometimes funny moments, the thing that stood out the most is that every character believes in their own way. The resulting conflicts are portrayed in great detail. We have made 'Fukiarenasai' as the product of this state of mind overlapped with the fiercely dancing snow."

Fukiarenasai (フキアレナサイ, Blow Violently) is a digital single by B'z, released only in Japan on November 23, 2016 via the Japanese iTunes store and all other major online music retailers in the country. This would be the band's third digital single and second in Japanese, following the 2012 release of English song "Into Free -Dangan-" and "Sekai wa Anata no Iro ni Naru" just one month prior in October 2016. Later, in June 2017, the song was released as the fourth track on the double A-side single "Seimei/Still Alive".

The existence of the song was announced and previewed on September 12, 2016 with the release of a trailer and press release for the action-comedy film Shippu Rondo starring Hiroshi Abe. Because of the action-oriented nature of the film, which was based on a novel by esteemed mystery writer Keigo Higashino, the producers' only request was that the song have the same feeling as a winter version of "ultra soul".

As revealed in Be With! after its release, the song was made available as a digital exclusive single due to the band's ongoing solo commitments as with the previous digital release. Additionally, and unusually for the band's workflow, "Fukiarenasai" was recorded separately with Koshi in Tokyo and Tak in Los Angeles.