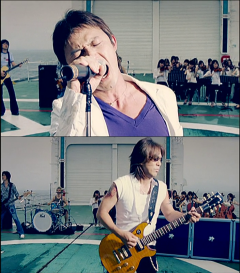 The band as they appeared during the single's promotional video, performing atop a Japan Coast Guard helicarrier.

B'z performing "OCEAN" during one of its most recognizable performances, from B'z LIVE-GYM 2010 "Ain't No Magic". The screen behind the band played a special video of various ocean scenes timed to the performance.

OCEAN is the thirty-ninth single by B'z, released on August 10, 2005. A gentle power ballad in every sense, the single's title song is a love song that has become one of the band's most requested and most widely-recognized songs, let alone ballads. Prior to its release, the single was tied into the Fuji TV television drama Umizaru Evolution, based on the popular open sea rescue manga series by Shuho Sato. The song's popularity as one of the band's staple ballads is rivaled only by the 2000 single "Konya Tsuki no Mieru Oka ni", which also served as a drama theme five years earlier.

The single was first collected on a compilation album three months after its original release as the flagship song on B'z The Best "Pleasure II", which would go on to sell over 750,000 copies in its first week alone. The following summer, a remixed version titled "OCEAN ~2006 MiX~" was found on the band's next studio album, MONSTER. This rendition of the song—the only alternate version to date—was remixed by American producer Jay Baumgardner, with added emphasis on the guitar and various portions of the instrumentation along with a different take being used for part of the melody. In 2008, the single version of the song would be collected once more on B'z The Best "ULTRA Pleasure" and would again be included in 2013's B'z The Best XXV 1999-2012 along with other era-appropriate singles.

The title song has been performed on a great deal of LIVE-GYM tours in the relatively short time span since its release, including seeing its premiere on the live stage during LIVE-GYM 2005 "CIRCLE OF ROCK". The song would again return the next summer for LIVE-GYM 2006 "MONSTER'S GARAGE", as well as for the twentieth anniversary tour LIVE-GYM Pleasure 2008 -GLORY DAYS- two years later. In addition to North American performances during LIVE-GYM 2011 -long time no see-, a particularly high-production version of the song was performed during LIVE-GYM 2010 "Ain't No Magic" in which a large rounded screen behind the band depicted footage of the ocean timed to their performance. Despite its immense popularity, it has only been performed on television once, during 2005's Music Station SUPER LIVE when it was coupled with fellow ballad classic "Itsuka no Merry Christmas".

The promotional video for the song was carried out as a large coordinated production. The video was filmed on location on the ocean with B'z performing the song atop a helicarrier with the support of the Japanese Coast Guard. As this was the first occasion in which a music video was allowed to be filmed on an active service vessel, it created considerable discussion in Japan at the time. Along with the band performing on the deck of the ship, the video also features numerous aerial shots on the open sea. The video features not only Tak and Koshi performing but also Takanobu Masuda on keyboards, Shane Gaalaas on drums, Akihito Tokunaga on bass, and Shinichiro Ohta on backing guitar, as well as a full strings section, all on the deck of the ship.

Upon release, "OCEAN" was an immense hit, debuting at the top of the Weekly Oricon Singles chart and going on to become the band's highest-selling single of all they've released since 2001. The song stayed on the charts for 22 weeks, which also remains the most weeks spent on the chart by a single of the same era apart from 2008's "Ichibu to Zenbu/DIVE". Along with being the band's thirty-fifth consecutive single to begin its run at number-one, it also amassed enough physical sales to reach the status of Double Platinum with the Recording Industry Association of Japan. Additionally, the song has also performed well on digital platforms, with the ringtone version of the single also reaching Double Platinum status. The full version of the song was also offered as a ringtone simultaneously, and sold enough to reach Gold certification. On music-based digital services, "OCEAN" is typically ranked in the top 10 of the band's offerings at any given time, including frequently on the Japanese iTunes service where it is a perennial mainstay. Despite its relatively late release date, the package still ranked as the seventh highest-selling single of the year 2005 and would receive the distinction of being the band's thirty-fifth consecutive single to debut at number-one.