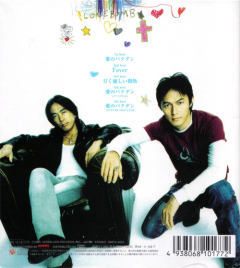 The rear cover to the limited edition single. The featured photograph of Tak and Koshi was used in numerous promotional materials around the time of release.

Capture from B'z appearance on Music Station SUPER LIVE 2012 performing "Ai no Bakudan". For the performance, explosive pyrotechnics were triggered at choice moments throughout.

Ai no Bakudan (愛のバクダン, Love Bomb) is the thirty-eighth single by B'z, released on March 9, 2005. To date, it remains one of the most popular songs produced by the band, frequently seeing inclusion on the majority of their LIVE-GYM tours. One month after its release, it would be collected along with one of its B-sides on the band's fourteenth album, THE CIRCLE. In addition, "Ai no Bakudan" would be collected on B'z The Best "Pleasure II" later in 2005, as well as B'z The Best "ULTRA Pleasure" in 2008 and B'z The Best XXV 1999-2012 in 2013. A remixed version would also serve as the lead track from the band's first international EP on iTunes in 2007, but has since become unavailable. In 2012, seven years after its original release, an English version titled "Love Bomb" served as the opening track for the band's self-titled digital English debut and ensuing North American tour.

Recorded late in THE CIRCLE sessions, the title song was composed and arranged to be a "simple" song that could be covered by experienced and aspiring musicians alike. As such, the song features a "back to basics" approach with only vocals, guitar, bass, and drums. To compliment this approach, the limited edition came coupled with complete guitar tablature for "Ai no Bakudan" printed on the back of the lyrics sheet. For purposes of learning the song in full, it also included a karaoke track free of the lead vocals as well as a "Guitar Solo Less" version that would allow beginner guitarists the opportunity to play along with the song without the solo. With five total tracks, the limited edition also makes it the largest single B'z has released.

The colorful cover for the single was the result of drawings made for the occasion by a group of kindergarten children from Okinawa Prefecture where the band was filming a commercial for the release. In a rare turn, more than one promotional video was filmed and released. The primary version was filmed in Japan and features a performance on a sound stage with pyrotechnics surrounding the band. This video, which was also made available in full to members of B'z PARTY, featured an electric guitar intro as opposed to the original track's acoustic guitar. A secondary version filmed in the United States was also made public, as well as one that features Tak and Koshi on a playground swingset for the video's duration. The swingset video idea was not planned and came about by chance when Tak and Koshi spotted the swing at the school whilst filming the commercial. In addition to its promotional videos, "Ai no Bakudan" was also promoted as the ending theme to music show "Japan Countdown" for March 2005 and as being the theme song to commercials for Zespri's "Gold Kiwi" fruit line.

The first two tracks on the release, "Ai no Bakudan" and "Fever", would be permanent fixtures on the setlist for B'z LIVE-GYM 2005 "CIRCLE OF ROCK". Although a full home video release initially did not materialize, special editions for one of the band's three 2006 singles, "SPLASH!", came bundled with performances from the tour. Of note was the green-colored version being bundled with a performance from the tour of "Ai no Bakudan", while the yellow edition included "Fever". In 2013, B'z LIVE-GYM 2005 -CIRCLE OF ROCK- was finally released in full on DVD as one of three home videos to begin the band's 25th anniversary celebrations.

The single would make appearances on several television programs in a rare instance of B'z appearing on a number of stations. Televised performances took place on a number of occasions, including Music Fighter, Music Station, and CDTV, which would make it the song most performed by B'z on television. The most notable appearance of 2005 came on retrospective program Bokura no Ongaku (Our Music) in which the band were interviewed at length on a number of subjects, including the origin of the song. In addition to the interview, studio performances of "Ai no Bakudan", in addition to its B-side, "Fever", and classic single "love me, I love you" were shown. In 2012, for the annual Christmas special, "Ai no Bakudan" would return to the Music Station stage with B'z performing the song coupled with another recent hit, "Ichibu to Zenbu".

"Ai no Bakudan" became an immediate hit for the band upon release, topping the Weekly Oricon Singles chart for the week of its release—becoming the thirty-fourth consecutively for the band to do so—and remaining on the charts for fourteen weeks. It would be the twenty-seventh highest selling single for the year, becoming one of two singles released by B'z in 2005, with the other being "OCEAN".