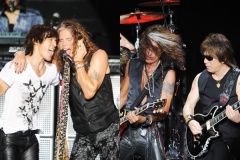 Koshi with Steven Tyler and Tak with Joe Perry during their joint rendition of the Aerosmith classic rock tune "Mama Kin". It was their second on-stage performance together, since 2002's FIFA World Cup International Day Concert. 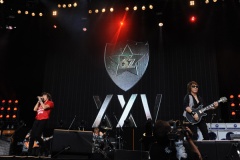 B'z during their portion of the setlist. The band played a number of classics, including hard-rockers "ZERO", "F・E・A・R", "Perfect Life", and "girigiri chop". 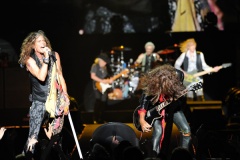 Aerosmith helping kick off the year's SUMMER SONIC festival. Their setlist included all of the hits, from "Jaded" to "Love in an Elevator", "I Don't Want to Miss a Thing", "Dream On", and "Walk This Way".

AEROSONIC was a special event held on August 8, 2013 as the opening performance for the 2013 annual music festival SUMMER SONIC. The event was a joint performance between B'z and American rock band Aerosmith, who joined forces for the second time, with their first rendezvous coming during the 2002 FIFA World Cup International Day Concert. As was the case with their last double-headlining gig, the two bands again performed together when B'z joined Aerosmith on stage for their classic, "Mama Kin". Tickets were made available beginning April 25 and were sold both to the general public as well as to members of B'z PARTY.

The show came between the hall and dome legs of the 25th anniversary tour B'z LIVE-GYM Pleasure 2013 -ENDLESS SUMMER-. As a result, the setlist was similar to that of other shows from the year but with unexpected additions. Popular singles "ZERO", "BLOWIN'", "Negai", "Hadashi no Megami", and "Samayoeru Aoi Dangan" were introduced to songs played as part of the hall tour, all of which would be carried over to the dome portion. In addition, "MY LONELY TOWN" made a return solely for the occasion, having not been performed since 2011's Music for Relief's Secret Show for Japan with Linkin Park.