ACTION is the sixteenth studio album by B'z, released on December 5, 2007. The release of the album was immediately preceded by the induction of B'z to Hollywood's RockWalk of fame. They became the first Asians to be inducted and joined the likes of AC/DC, KISS, the Rolling Stones, and Van Halen. Two singles—the emotional ballad "Eien no Tsubasa" written for the film For Those We Love and hard rock single "SUPER LOVE SONG"—were released in the months leading up to the album.

The album's production was more troubled than any other in B'z history to that time. Recording began in January and was not completed until late in the fall. Initial difficulties arose due to Tak's desire to explore new territory as a result of the album being representative of their twentieth anniversary year. After battling several unproductive sessions, the band were left with one of their most eclectic albums to date that fuses jazz, pop, and shuffle rhythms for the first time in their history.

Despite its length of seventeen tracks, all but three of the songs have been performed live. The resulting album tour B'z LIVE-GYM 2008 "ACTION" would also prove one of their longest, lasting from January to August of 2008 and leading into their twentieth anniversary tour B'z LIVE-GYM Pleasure 2008 -GLORY DAYS-. After a half-decade of dormancy, several songs from the album were played during B'z Special LIVE at EX THEATER ROPPONGI in 2013. The show was a one-off performance tied to purchases of B'z The Best XXV 1988-1998 and B'z The Best XXV 1999-2012.

Upon release, ACTION debuted at the top of the Weekly Oricon Albums chart with 292,987 physical copies sold. It would be ranked fifth for the month, number 36 for the year of 2007, and continued to sell well into 2008 where it ranked number 76 for the year. It has been certified Platinum by the Recording Industry Association of Japan and is nearing Double Platinum status with sales of 440,108 last reported. In 2018, the album was reissued as a two vinyl set made available to visitors of their thirtieth anniversary public exhibition entitled "SCENES" alongside all other studio albums to that point.

The first sighting of B'z activity for the year of 2007 was the announcement of their first international tie-in. The PlayStation 2 racing video game Burnout Dominator was released worldwide in March and featured an all-new B'z song in every territory entitled "FRICTION". The song was included as a means of promoting the game primarily in Japan, but it would later be included the next year in the sequel game Burnout Paradise that was likewise released globally. The song was also published worldwide on iTunes at the same time as part of the soundtrack. This version of the song would be re-recorded with new vocals and an altered arrangement for the year's studio album under the title "FRICTION -LAP 2-".

It was shortly thereafter that B'z made their proper international debut on the digital platform when the self-titled B'z EP was released to virtually every western storefront on iTunes yet was not made available in Japan. Although the release was aimed at an international audience, only two of its five tracks were in English: the aforementioned English version of "Home" and the 2005 THE CIRCLE album closer "Brighter Day"—one of their select few English songs with no Japanese exemplar. The album contained highly-desired versions of three popular B'z singles: a remix of "Ai no Bakudan", a re-recording of "ultra soul" that most resembled its more recent rock-oriented LIVE-GYM incarnations, and an overhauled reversion of "Samayoeru Aoi Dangan" that featured an entirely new arrangement that would serve as the basis for 2012's English edition "Into Free -Dangan-". 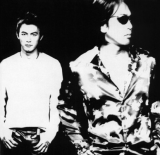 The international EP released in Western countries on iTunes contained five tracks in versions unavailable in Japan and is now no longer available.

While this provided insight into the band's work in the early months of 2007, it was not yet known what form the rest of the year's releases would take. This was answered shortly thereafter with the announcement of their forty-third single: sentimental power ballad "Eien no Tsubasa". The song was paired with B-side "Lonely Stars" and remains one of the few times in which music videos were produced for all tracks on a single, with the latter's being a short version. In the lead-up to its release, B'z embarked on one of their busiest years with regard to television, with five appearances in the week of its release on programs such as MUSIC FIGHTER (twice—once for the title song and once for the B-side), CDTV, and Music Station.

Beginning in June, B'z embarked on SHOWCASE 2007 -19- in which the band ran the gamut of Zepp venues in Sapporo, Sendai, Tokyo, Fukuoka, Osaka, and Nagoya. As is now common for the events, B'z played a number of gems and obscure songs for the tour, including "HOT FASHION -Ryuukoukata-" for the first time in 14 years, "ARIGATO" for the first time not on TV, "The Wild Wind", "Naite Naite Nakiyandara", and "Haru", as well as "Out Of Control" and "Odekake Shimasho" for the first time since the mid-1990s. The show at Zepp Tokyo would be released on DVD in 2008 and on Blu-ray in 2009. The concept was broadened and expanded into yet another of its kind, the aptly-named B'z SHOWCASE 2007 -B'z In Your Town- which toured smaller areas of Japan throughout July and August. Further fan favorites were added on varying dates including "The Loose", 2001 B-side "ROCK MAN", the return of 1998 single "HOME", the live debut of "BANZAI" B-side "Magnolia", and even GREEN album ender "GO★FIGHT★WIN". None of the shows were released in full, though select moments were highlighted on the 2008 "Official Bootleg".

This would also mark the first year at which B'z performed at a music festival when they were announced as one of the headline acts for SUMMER SONIC 07. The abbreviated setlist was akin to the summer's earlier SHOWCASE tours and opened with the as-yet-unreleased "SUPER LOVE SONG" and included "FRICTION" amongst some of their live staples such as "ultra soul" and "Ai no Bakudan". Shortly thereafter, B'z soon announced the year's second and overall their forty-fourth single in the oft-previewed "SUPER LOVE SONG". The third of its three tracks would be the aforementioned "FRICTION" as it appeared in Burnout Dominator. The title song was a great challenge initially and was not intended as a single. It was originally a much slower, ballad-like composition. It wasn't until months later when they returned to Japan that they reworked the song to its eventual state.

B'z becoming the first Asian artists to be inducted to Hollywood's RockWalk on November 19, 2007.

Although their second-longest album in terms of total songs included, ACTION was an album that did not come easily. Koshi described its production as being the result of a struggle and slump unlike anything that had preceded it. With their twentieth anniversary looming and a tour to support this album already planned, there was immense pressure to complete the album on time. This slump was partially the result of B'z deliberately leaving their comfort zone to find the limits of their capabilities as a band.

Their motivation behind trying so many different flavors for the sessions stemmed from this being a lead-in to their twentieth anniversary year. There was an expectation within the band to push their boundaries, which led to more complex compositions and ones that relied less on guitar than previous works. Songs that evoke Latin, jazz, and shuffle rhythms as well as the golden era of 1950s American pop music. Combining the history of those many genres produced some of the album's most memorable works and laid the foundation for experimental tracks that would follow on proceeding works.

While the album includes seventeen tracks, a total of twenty-three songs were produced during the production period. Songwriting began in September 2006 with the band entering the studio in January 2007 in Los Angeles. Surprisingly, even after a month of effort, not a single song was completed in that entire first month. "It was the first time that songwriting had not gone well," Tak said, adding, "it was a terrible shock." It was here that the band welcomed studio specialist Hideyuki Terachi to aid with arrangement, who has since served that role for many of their B'z and solo activities.

Tak recounted that he started to dread going into the studio because the initial sessions were not at all amounting to what they expected. To overcome the slump, Koshi noted in the interview that they "started doing music with a different feel to it, and that went well" which led to them returning to their usual "recording rhythm". As a result, the album contains a large number of upbeat tracks that deal with a great variance of themes and topics such as the lively "HOMETOWN BOYS' MARCH" and the sentimental "Boku ni wa Kimi ga Iru". The album ended with the Ending SE from the previous year's LIVE-GYM, "BUDDY", which had its lyrics significantly overhauled.

Along the way, some form of the word "light" was considered a candidate for the album's title. The slump that had delayed the album's completion resulted in the song "Koubou" (Ray of Light) as the prevailing attitude in the studio was one of seeking light. Instead, the overall theme was not just "light" but "taking action while seeking light".

During the album tour, before performing "Koubou" near the end of the show, Koshi detailed the the struggle and overall theme of combating depression and adversity:

In September, it was announced that B'z would become the first Asian artists to be inducted to Hollywood's RockWalk, joining the likes of Elvis Presley, AC/DC, Aerosmith, Queen, Jimi Hendrix, and John Lennon. Many of the band's longtime support members were in attendance including Stevie Salas, Juan Alderete, Shane Gaalaas, and Steve Vai who ushered in the duo's nomination. The induction was a widely-reported news item in Japanese newspapers and television. The ceremony took place on November 19, 2007 and saw the band deliver messages of gratitude in both English and Japanese. At the ceremony, B'z live footage from previous years was shown alongside samples of songs from their upcoming album which had been set for release just weeks later.

Having just "rebooted" the LIVE-GYM the year prior with B'z LIVE-GYM 2006 "MONSTER'S GARAGE", the band continued ahead by adding returning support member Barry Sparks for LIVE-GYM 2008 "ACTION". The tour became one of their longest, lasting from January to August of 2008 with the band then heading into Pleasure 2008 -GLORY DAYS- for their twentieth anniversary at Nissan Stadium. Not only were album songs performed, but also a great deal of hidden gems such as "Kimi no Naka de Odoritai", "LADY-GO-ROUND", "FRIDAY MIDNIGHT BLUE", and "FOREVER MINE".

Ore to Omae no Atarashii Kisetsu

Ore to Omae no Atarashii Kisetsu