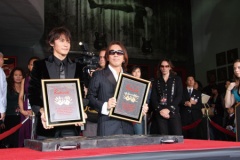 B'z in November 2007 as they became the first Asian musicians to be inducted to Hollywood's RockWalk in Los Angeles, California.

The primary promotional image used in press materials for the single. It would later be used as the band's image on their RockWalk profile.

The band performing "SUPER LOVE SONG" during B'z SHOWCASE 2007 -19-. The tour marked one of only a select few occasions in which B'z premiered a song to fans live.

SUPER LOVE SONG is the forty-forth single by B'z, released on October 3, 2007. Along with the year's earlier single "Eien no Tsubasa", it would first be collected on the band's sixteenth studio album, ACTION, prior to being added to 2008's 20th anniversary compilation B'z The Best "ULTRA Pleasure". Five years later, it would again be collected on one of the band's two twenty-fifth anniversary compilations, B'z The Best XXV 1999-2012.

During B'z SHOWCASE 2007 -19-, "SUPER LOVE SONG" would become one of the few B'z songs to be premiered live ahead of its unveiling through official channels. The song would be used to open shows for B'z throughout the summer at all dates of the aforementioned tour as well as B'z SHOWCASE 2007 -B'z In Your Town- and their appearance at SUMMER SONIC 2007.

A promotional video was filmed for the single featuring American drummer Jeremy Colson and Robert DeLeo of the Stone Temple Pilots on bass, who both also played for the studio version. The video made use of computer-generated imagery and featured only the band members. Although it was not included on the limited edition that included a DVD—which instead featured a live performance of the song—it was aired on multiple music channels at the time of release. In addition, B'z performed the song twice on television as promotion: the first a week prior to release on HEY!HEY!HEY!, and again on a Music Station special on October 24th.

While the title song of the single was not used as a tie-in promotion, the second B-side, "FRICTION", was included on the soundtrack of the Electronic Arts racing video game Burnout Dominator in all regions. The game saw its release in Western territories in March before being released in Japan in late September. The song was also used as the theme to music show "JAPAN COUNTDOWN" for the month of October. Earlier in the year, the song was available internationally on iTunes—alongside the self-titled international EP—as part of the game's soundtrack beginning in April, making it available well before the other two tracks on the single. As of 2012, the song is no longer available on international iTunes stores. However, the song would also appear in another installment of the same video game series when it was included in 2008's Burnout Paradise and a decade later on 2018's Burnout Paradise Remastered. This was the band's first original English composition since 2005's "Brighter Day" and was their latest game tie-in until "Into Free -Dangan-" served as the global theme to 2012's Dragon's Dogma.

"SUPER LOVE SONG" premiered at the top of the Oricon Weekly Singles and was the fortieth consecutive for the band to do so. The single would sell over 180,000 physical copies in its first week of release and go on to be certified Platinum by the Recording Industry Association of Japan while finishing nineteenth overall for the year of 2007.

On November 19, 2007, one month following the single's release, B'z made history when they became the first Asian artists to be inducted to Hollywood's RockWalk in Los Angeles, California.