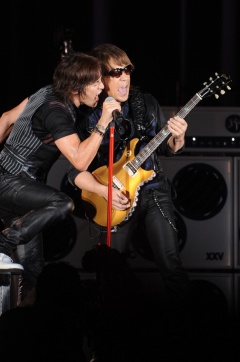 Koshi and Tak during the 25th anniversary concert on September 21, 2013 at Nissan Stadium. The show took place in front of 70,000 fans and showcased many of the band's most beloved songs.

The band performing in Yamagata near the end of the hall leg of the tour. The hall tour resembled that of what could be expected from a SHOWCASE event, with many rarely-played obscure songs rounding out the setlist. 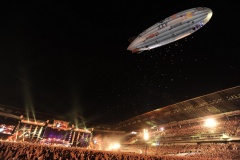 Shot of the airship deployed during a special performance of "Ai no Bakudan" as seen during all stops of the dome portion of the tour. 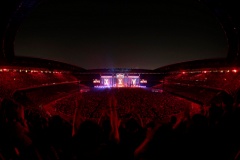 The scene during the 25th anniversary concert at Nissan Stadium, where the band returned following their likewise sold out showing for the 20th anniversary show, GLORY DAYS.

B'z LIVE-GYM Pleasure 2013 -ENDLESS SUMMER- was a LIVE-GYM by B'z that toured all of Japan from June 15, 2013 through anniversary performances on September 21 and 22 at Nissan Stadium where B'z previously closed out their 20th anniversary tour, B'z LIVE-GYM Pleasure 2008 -GLORY DAYS-. The Pleasure tour was the ninth of its kind and commemorated the band's 25th anniversary in the music scene. As is the case with other Pleasure shows, B'z were able to draw from the full breadth of their catalogue to construct the setlist as opposed to the album tours that are structured around the releases in question. As has been the case in the past, the tour was preceded by a SHOWCASE event, B'z SHOWCASE 2013 -Pleasure75-, which served as a warm-up gig and featured a similar setlist.

The tour was divided into two parts: a hall portion that ran from June 15, 2013 to July 31, and a dome leg that lasted from August 24 through September 22. The hall tour featured a total of 19 songs per show with a great many rotations and alterations throughout. Overall, the setlist for these smaller shows was akin to that of a SHOWCASE, giving the band the opportunity to play some of its more obscure songs that are often overshadowed by its many hits. In addition, the tour marked the LIVE-GYM debuts of "Q&A", "Kakushin", and "Utopia", which had served as bonus songs to the B'z The Best XXV compilations whose release coincided with the beginning of the tour.

On June 12, three days prior to the tour's start date, the official tour goods were unveiled. This eventually expanded into a full "Tour Merch Revival" that featured shirts from the past 25 years of the band's history being reissued en masse for the very first time. All items were eventually made available on B'z The Store for online orders.

Between the hall and dome portions of the tour, B'z once again reteamed with American rock legends Aerosmith for a special double bill at the annual SUMMER SONIC music festival in Japan under the special banner AEROSONIC. This was the second collaboration between the two bands following their joint headlining of the 2002 FIFA World Cup International Day Concert.

The tour was released on home video on January 29, 2014, on both DVD & Blu-ray as B'z LIVE-GYM Pleasure 2013 ENDLESS SUMMER -XXV BEST-. The release came in two editions: a regular version featuring the tour finale at Nissan Stadium, as well as a complete edition with a feature-length documentary covering both legs of the tour and a second full concert covering the hall tour's final show at Aizu Fugado. The complete edition comes in the form of a multi-disc set with a runtime of 348 minutes, making it by far the largest set the band has ever released.

The hall portion of the tour represented a revival of various fan favorites from albums past, with only a maximum of six of the 19 songs on a given night being singles. This includes the album track "Dead End" from 2011's studio album C'mon that initially went unperformed during the ensuing tour of the same name. The song was performed at all dates of the hall tour, whereas it had previously been expected to remain as one of the songs never performed live by the band.

New song "Q&A" was used to open the shows, and was followed by a litany of fan requests including the return of early single "LADY NAVIGATION" for the first time in ten years. Album songs "Yumemi ga Oka" from 1995's LOOSE, "STAY GREEN" from 2002's GREEN, "Happiness" and "Survive" from 1997's SURVIVE, and "Perfect Life" from 2008's ACTION were performed on all stops, along with Pleasure perennial "NATIVE DANCE" from 1991's RUN and the OFF THE LOCK classic "OH! GIRL" from 1989. For Tak's solo performance mid-show, a new composition entitled "Rain" was played that was not based on any of his previously released work. Additionally, fan favorite "The Wild Wind", that had served as the B-side to megahit "HOME" in 1998 and was later collected untouched on B'z The "Mixture" in 2000, also made its first appearance since 2007. Recent hit "Ichibu to Zenbu" from 2009 was also included for all stops as the final song prior to the encore, with "Koi-Gokoro" returning earlier in the setlist after a five year hiatus and continuing its reign as one of the most-played Pleasure songs.

Throughout the tour, several alterations were made to the setlist, with pairs of songs being swapped out in favor of others. Brotherhood favorites "F・E・A・R" and "Gin no Tsubasa de Tobe" were alternated with one another occasionally, while new songs "Utopia" and "Kakushin" from B'z The Best XXV compilations were also performed in rotation. The pair were only played together on the first night of June 15, 2013 and were performed separately afterward. The oft-overlooked ballad "GOLD" made an unexpected return where it was alternated with fellow ballad "Gekkou" from RUN. Two upbeat rock singles, "DIVE" and "girigiri chop", also were swapped in and out throughout the shows.

The encores for all shows were reserved for some of the band's biggest hits, with alternating pairs of "OCEAN" and "Ai no Bakudan", "Konya Tsuki no Mieru Oka ni" and "ultra soul", and "ALONE" with "BAD COMMUNICATION" being performed together on different dates.

For the dome portion of the tour, the band drifted from the SHOWCASE-style setlist they had put together for the hall leg and instead constructed a true Pleasure setlist. As was the case with the previous leg, multiple songs were alternated throughout the tour in certain slots. This mixing and matching resulted in eight different versions of the setlist throughout the tour.

The dome tour featured three new songs making their public debut. For each entry of the dome tour, a new song entitled "Endless Summer" was used to open the show. Tak's solo performance "Rain", which appeared in the earlier hall tour, was also played throughout all dates of the dome tour. A second new B'z number by the title of "Kimi wo Ki ni Shinai Hi Nado" was used as the second Ending SE played as the band was leaving the stage, which was performed live months later during B'z Special LIVE at EX THEATER ROPPONGI. The track would later be found on 2015's studio album EPIC DAY.

A special performance of "Q&A" was played near the end of the concert, featuring not just B'z on stage but also samurai extras akin to the music video for the song. An all-acoustic performance of "Aikawarazu na Bokura" from 1991's studio album IN THE LIFE came mid-show and featured both the band and the support members all playing guitar for the occasion. "Hadashi no Megami", unlike other songs in the setlist, only appeared on the first day of the dome tour before being replaced permanently by "Samayoeru Aoi Dangan" for the remaining dates. This marks the second time that "Samayoeru Aoi Dangan" became a prominent part of a Pleasure setlist, with the previous one occurring thirteen years ago.

Despite the setlist changes throughout, the encore of "juice" and "ultra soul" was left intact throughout each showing.