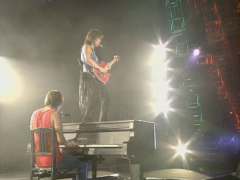 B'z playing "ALONE" from their iconic performance during "BUZZ!!" THE MOVIE. The image of Koshi on piano and Tak playing from the top of it is one of the band's most commonly recognized moments on stage.

ALONE is the ninth single by B'z, released on October 30, 1991. The sole single from their album from the same year IN THE LIFE, the single became a standout hit and became one of the band's many million selling singles. With the launch of this single, the subsequent album, and their growing catalogue of hits, B'z earned the title of the artist with the most discs sold for the year of 1991.

Despite the song's popularity, live performances of it have typically been reserved only for special occasions. The most iconic performance came during the encore of B'z LIVE-GYM Pleasure'95 "BUZZ!!", in which Koshi played a grand piano that rose from beneath the stage with Tak standing atop it. This performance was featured in full on home video as part of the concert film "BUZZ!!" THE MOVIE in 1996. "ALONE" was then retired until B'z LIVE-GYM Pleasure 2000 "juice" five years later, and would not be heard again from the band until B'z LIVE-GYM 2005 "CIRCLE OF ROCK". It made a rare reappearance eight years later in 2013 as part of B'z LIVE-GYM Pleasure 2013 -ENDLESS SUMMER- where it would alternate each day with other popular B'z ballads "OCEAN" and "Konya Tsuki no Mieru Oka ni" in the hall tour, while it alternated with "GOLD" and "OCEAN" in the dome tour. In the years since, it has not yet been revived during any proceeding tours.

No promotional video was filmed for the single's release, though there was a tie-in with a Fuji TV drama titled "Onna no Kigyou Suspense: Hotel Woman" where the title song served as the show's theme. In recent years, when "ALONE" has been highlighted for compilation commercials and on television programs, the performance from "BUZZ!!" THE MOVIE has assumed the role of a promotional video. In 1992, a karaoke version of the song was released on the band's first karaoke album.

The single was simultaneously remastered and re-released on March 26, 2003 along with nine other of the band's older singles and the then-latest single, "IT'S SHOWTIME!!". On the daily chart at launch, B'z held a monopoly over the chart's top eleven slots, with the new single ranking at the top and the re-issues covering the remaining ten. Ultimately, B'z would set a record that week for holding nine of the Top 10 slots for the week of release, with "ALONE" coming in eighth place.

The legacy of the title song for this single is that of one of the band's best-regarded and best-remembered works. Upon release in fall of 1991, the single debuted at number one and held onto the spot for two weeks despite healthy competition. It became the second of the band's singles to reach one million copies after "LADY NAVIGATION" and achieved a number of sales milestones in its time on shelves, having been certified Triple Platinum by the Recording Industry Association of Japan and receiving Oricon's Million certification as well.

In 2012, friend of the band and fellow rock musician Eric Martin released an English cover of the song as part of his Mr. Vocalist series. This newly English rendition retained the arrangement of the original as well as the English chorus but also featured a new solo by Stevie Salas, who had frequently collaborated with Koshi on his solo work previously.