EPIC DAY is the nineteenth studio album by B'z, released on March 4, 2015. The album was the band's first in nearly four years after the 2011 release of C'mon. Its release was preceded by their comeback single "Uchouten" in January which was collected for the first time on the album. As a first for the band, the album was released in several editions. Along with the CD version, a special LIVE-GYM edition containing LIVE-GYM 2015 memorabilia as well as the album was released, as was a CD and DVD version including a full concert from B'z LIVE-GYM 2012 -Into Free- EXTRA. Additionally, a special vinyl edition was announced to be available as a limited run item alongside the others. According to an interview with the band in volume 102 of Be With! documenting the creation of the album, the idea of releasing on vinyl came about during the recording process. This would be the first vinyl album released by the band since their second effort OFF THE LOCK received the same treatment in 1989. Notably, in 2018, the vinyl edition was reissued and made available to visitors of their thirtieth anniversary public exhibition entitled "SCENES" alongside all other studio albums to that point.

The album was supported by B'z LIVE-GYM 2015 -EPIC NIGHT-, which ran from March to July of 2015. Unusually for the band with the large amount of songs in their back catalogue, every song from the album has been performed live with none left unperformed—the first occasion in which this was the case since 1997's SURVIVE. While all were performed, only one track—standout ballad "Classmate"—was not recorded on the eventual home video release as it had been swapped for fellow ballad "Kimi wo Ki ni Shinai Hi Nado" for the dome portion of the tour.

Upon release, the album debuted at the top of the Weekly Oricon Albums chart with 209,576 physical copies sold. The album quickly reached Platinum status with sales in excess of 250,000 copies and continued the band's streak of having all of their studio albums reach the distinction. Ultimately, this would be the band's twenty-seventh number one album release. Additionally, the album was the second highest selling of March 2015. On March 18, the album was made available for digital purchase on a variety of Japanese music platforms, including the Japanese iTunes store.

Following their year-long festivities for their 25th anniversary in 2013, the band took a break from B'z activities following the B'z Special LIVE at EX THEATER ROPPONGI show on November 30, 2013. This hiatus afforded the individual members time to dedicate to solo activities. Tak would go on to release his tenth studio album New Horizon in April and followed it up with his first true solo tour, Tak Matsumoto LIVE 2014 -New Horizon-, from May to June. Meanwhile, Koshi released three digital exclusive singles leading up to his fifth studio album, Singing Bird, in May. A special live engagement entitled Koshi Inaba LIVE 2014 ~en-ball~ saw ten shows all played at Shinagawa Stellar Ball over a period of two weeks.

As the band's solo activities wound down, it was revealed in Be With! issue 102 that the duo would immediately be returning to the studio come August to work on their next B'z album. It was unknown whether the album would be released by the end of the year as few public announcements were made during the recording process. Shane Gaalaas and Barry Sparks were both involved in the recording from the onset, with the former providing social media updates as he came to and from Japan. However, in October, the 103rd issue revealed twenty-seven tour dates from a then-untitled 2015 tour, with more dates promised in the near future.

Tak Matsumoto and Slash on the cover of YOUNG GUITAR.

With regard to returning to their recording rhythm, the band changed their tactics slightly. Unusually, the second half of the album was recorded with Koshi in Tokyo and the rest of the recording unit in Los Angeles. He initially found this difficult, but began to appreciate the time difference as he was able to calmly collect his thoughts and have something ready for the band on the following day after they had exchanged ideas. Additionally, the sessions saw the band creating a full chorus for each song with dozens of potential songs being written a phrase at a time. Once the song progressed far enough and was agreed upon, lyrics would be added. When asked why, Tak recalled, "I don't remember why so well. Essentially, I wanted to make a lead single that would signal a restart of B'z after our solo activities. I recorded a chorus to numerous potential songs trying to find [the right] single." Notably, the sessions led to a great many full-sized out-takes from the album, not just partial ones.

The first song to be revealed from the sessions was "Exit To The Sun", an acoustic ballad that was simultaneously announced as the theme to NHK drama series Dark Suit. The series began airing on November 22nd and featured the song throughout its run. One week later, another song could be heard on television and online when "NO EXCUSE" began airing as the theme to a line of Smirnoff Ice commercials. The title of the album was first publicly revealed shortly thereafter in various morning newspapers across Japan on December 3, 2014. Along with mentioning the title EPIC DAY, the spread unveiled lead single "Uchouten" along with its release date and the details of its two editions. At the same time, the previously untitled LIVE-GYM to begin in March received its final title of B'z LIVE-GYM 2015 -EPIC NIGHT-. 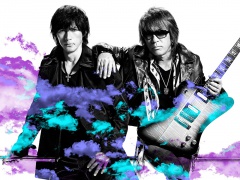 The photograph of B'z uploaded to the official website during the EPIC DAY promotions and distributed to various press outlets at the time.

The lead and only single from the album, "Uchouten" was much-anticipated as it was the band's first in the nearly three years since 2012's "GO FOR IT, BABY -Kioku no Sanmyaku-". A sample of the song was briefly available on the band's official website, but it would not be heard in full until it premiered on radio in the last weeks of 2014. The first live performance of the song came on Music Station SUPER LIVE 2015 on which B'z was one of the premiere guests. A music video was shot for the single, clips from which began airing on various Japanese news and music-themed television programs as well as being featured in commercials leading up to its release.

On January 1, it was announced that the February issue of YOUNG GUITAR magazine would feature Tak Matsumoto and Slash on the cover together as well as the subjects of a special joint feature. The two guitarists sat down for a lengthy discussion, during which they discussed their influences, playstyles, and the two of them both having worked with Koshi in the past.

With the tour start date looming, "Uchouten" was released on January 14, 2015 and debuted at the top of the Weekly Oricon Singles chart for the band's forty-seventh consecutive number one single as it moved over 75,000 physical copies in its first day on shelves. Two days later, on January 16, it was revealed that a new EPIC DAY song, "Amari ni mo", would serve as the theme to a pair of commercials for H.I.S, a travel company based out of Japan.

After a long wait, the release details for EPIC DAY were confirmed on January 26, 2015 with an update to the band's official website. In an unprecedented move for the band, the album was announced for release in four separate editions. In addition to the CD version, special vinyl and LIVE-GYM merchandise bundles were also made available, with this being the first occasion on which B'z officially issued a vinyl for retail purchase. A longbox edition including both the CD album and a bonus DVD included the full performance from B'z LIVE-GYM 2012 -Into Free- EXTRA in Osaka. The home video thus marks the proper video debuts of "HEAT" and English versions of "Love Bomb", "Ultra Soul", "Juice", and "Into Free -Dangan-". It also marks the first time both "MOTEL" and "Itoshii Hito yo Good Night..." appear in an uncut home video concert recording. Along with pricing and pictures of the various editions, the update also confirmed the final tour dates for B'z LIVE-GYM 2015 -EPIC NIGHT-, with its final date being scheduled for July 26 at Nagoya Dome.

On February 12, a short music video for album opener "Las Vegas" was added to the band's YouTube channel. Additionally, the previously-aired video for the album's single "Uchouten" was also uploaded in shortened form as well. Along with the updates came news that "Las Vegas" would be serving as the theme to the 2015 Red Bull Air Race in Chiba come May 16 and 17. Short music videos for "Kimi wo Ki ni Shinai Hi Nado" and "Classmate" were likewise uploaded to the channel shortly thereafter.

The title of the album originated in Koshi watching a day-end sports summary program in English, in which a player having been the most valuable in the game was described as "having an epic day". He was not familiar with the idiom of describing things as "epic" in such a way at the time, which is why he explained the term to the crowd during the ensuing live tour. Shortly thereafter, while preparing to go surfing in Los Angeles and listening to the local news for weather updates, the state of the waves were described as "epic". Hearing this, he asked drummer and Canadian native Shane Gaalaas, "You can use it in this context too?" Afterward, he proposed the title EPIC DAY to Tak, which was agreed upon.

The cover of the album went through a number of variations. B'z were presented with various concept pieces from famous locations around the world, but none were considered suitable and were rejected. The band then suggested they try using a location in Japan and from that came renditions of Roppongi and Shibuya—the latter of which was ultimately used as they felt it was most recognizable.

NOTE: The vinyl edition splits "Las Vegas" through "Amari ni mo" into SIDE A and "EPIC DAY" through "Man Of The Match" on SIDE B.

Exit To The Sun

Man Of The Match