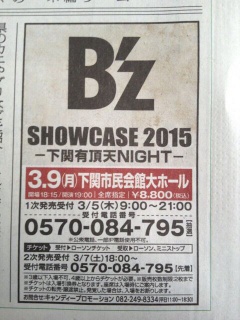 The newspaper advertisement announcing the SHOWCASE event, which would serve as a warm-up for the upcoming full 2015 -EPIC NIGHT- tour.

B'z SHOWCASE 2015 -Shimonoseki Uchouten NIGHT- is a SHOWCASE by B'z that took place on March 9, 2015. The one-date concert was held just two days prior to the start of B'z LIVE-GYM 2015 -EPIC NIGHT-, for which it served as a warm-up. The name of the SHOWCASE is a combination of the aforementioned tour's title, the band's fifty-first single "Uchouten" that would be featured on EPIC DAY, and the city in which the SHOWCASE itself was to take place, Shimonoseki.

As with all SHOWCASE events that lead to larger tours, the event was announced only in local Shimonoseki newspapers with a number for fans to call in order to obtain tickets. In order to allow as many locals as possible access to the show, call originating from outside of the immediate vicinity were blocked.