GO FOR IT, BABY -Kioku no Sanmyaku-

B'z as they appeared in the "T-Shirt Live" commercial for Pepsi NEX. An animated ink effect of Tak and Koshi as they performed was superimposed onto the shirts of extras. 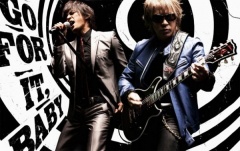 Promotional image for "GO FOR IT, BABY -Kioku no Sanmyaku-" seen in various media materials at the time of release and on the official website.

The two variants of the B'z Pepsi NEX shirt promotion available to winners.

GO FOR IT, BABY -Kioku no Sanmyaku- (GO FOR IT, BABY -キオクの山脈-, GO FOR IT, BABY -Mountains of Memories-) is the fiftieth single by B'z, released on April 4, 2012. It was the first single to be released following the conclusion of the previous album tour, B'z LIVE-GYM 2011 -C'mon-. The title song was released as a non-album single, as with 2008's "BURN -Fumetsu no Face-", prior to being collected on one of the band's two twenty-fifth anniversary compilations, B'z The Best XXV 1999-2012. Upon release, the single debuted at the top of the Oricon Weekly Singles chart and became the band's record forty-sixth consecutive single to do so.

As was the case with "Sayonara Kizu Darake no Hibi yo" in 2011, "GO FOR IT, BABY -Kioku no Sanmyaku-" served as a theme to a Pepsi NEX commercial. In addition to the commercial, a special promotion was offered that allowed fans to gain a chance at winning special B'z Pepsi NEX T-shirts that featured one of two designs. Similarly, the single was first performed live during the Pepsi NEX presents B'z PREMIUM LIVE shows and was included as the second song in the setlist for the proceeding North American tour, B'z LIVE-GYM 2012 -Into Free-.

Production for the new single was already underway in November 2011. Koshi stated in an interview for Be With! that he did not put much thought into it being the band's fiftieth single. As a result, there wasn't initially something special in mind during the initial preparation. Ultimately, it was decided that Tak would be taking on a guest vocalist role in addition to his usual duties. Koshi worked very closely with Tak when writing the lyrics for the part, which marked the first occasion in which Tak served as a main vocalist on a B'z single.

The B-sides "Honoka Naru Hi" and "Ryuusei Mask" were drawn from the dead stock that did not make it onto 2011's studio album C'mon. According to Tak, there are many unused songs that didn't make the record. The two songs were chosen in particular because they provided balance to the A-side of the single.

"GO FOR IT, BABY -Kioku no Sanmyaku-" was certified Gold by the Recording Industry Association of Japan and ranked at number thirty-four on the annual year-end singles chart on Oricon with sales in excess of 180,000 physical copies. A promotional video featuring the band was filmed for the single that made extensive use of computer imagery and was the first for a single by the band to be added to their YouTube channel prior to release. On the day of release, a limited edition package coupled the video with three performance from the previous year's Pepsi NEX presents B'z 1DAY LIVE in a limited edition CD and DVD package.

GO FOR IT, BABY -Kioku no Sanmyaku-