B'z as they appeared in the music video that was filmed on location in the desert north of Los Angeles proper as well as in the city itself. 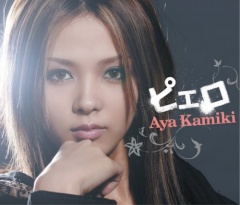 The art to the single of Aya Kamiki's cover of "Pierrot". Kamiki had been a big fan of the band since youth, and even performed numerous B'z covers in her professional career on stage, including ones of "juice", "Ai no Bakudan", and "LOVE PHANTOM".

Yuruginai Mono Hitotsu (ゆるぎないものひとつ, One Sure Thing) is the forty-first single by B'z, released on April 12, 2006. The single, one of three released by the band in 2006, was a power ballad that came after their rock anthem "Shoudou" and before their summer mega hit "SPLASH!". Prior to the single's release, the song could be heard in theaters in the year's annual Detective Conan movie, The Private Eyes' Requiem. The song was the band's second contribution to the franchise for 2006 after "Shoudou" served as a theme to the television series earlier in the year. Previously, B'z had contributed themes to the 1999 and 2002 films, with "ONE" and "Everlasting" respectively. This single was the first occasion in which a B'z single was tied in with a feature film, which is a practice that would continue the following year with "Eien no Tsubasa".

The B-side "Pierrot" was also given by the band to fellow GIZA artist Aya Kamiki to cover after they had written the song. The female punk rock singer had been a fan of the band for many years, having covered a number of their songs live and having cited them as a chief influence on her music career on more than one occasion. Her version of the song served as a single and would go on to become her highest solo single in her career. GIZA decided to schedule the release on the same day as that of "Yuruginai Mono Hitotsu", which saw both versions of "Pierrot" being released on the same day. The two versions are similar, with the arrangement to Kamiki's cover being slightly different and featuring one slightly altered line in the lyrics. At the time of release, the B'z version of "Pierrot" also served as the theme to a TV commercial by the mobile ringtone company Dwango, who were also promotional partners for a special live concert later in the year that was streamed live on the internet and later released on DVD as B'z LIVE in Namba 2006.

A promotional video was filmed on location in Los Angeles on the famed Vasquez Rocks in the Sierra Pelona Mountains which have also served as a filming location for numerous films and television series, such as 24, CSI, Star Trek, and the original Dracula film in 1931. The video also featured numerous vignettes with actors showcasing memorable moments throughout human lives as they embrace the titular "one sure thing" they can count on. Tak performed the guitar solo on the roof of the Miyako Hotel in downtown Los Angeles with the skyline in view in the background. In further promotional efforts, B'z appeared on the March 31 edition of Music Station to perform the title song, and did so again on April 15 for fellow music program CDTV.

Upon release, B'z debuted at the top of the charts for their thirty-seventh consecutive number-one debut with what would become the thirty-third highest selling single of the year. Both the title song and B-side were collected later in the year on the summer's album, MONSTER, which was the first time this was the case since the release of "LADY-GO-ROUND" in 1990. Additionally, both songs were performed at all stops of B'z LIVE-GYM 2006 "MONSTER'S GARAGE" and were included on its subsequent video release. However, the title track has not been played live since 2006, while "Pierrot" only reappeared briefly in B'z SHOWCASE 2017 -Hissatsu Hiokinin- and B'z SHOWCASE 2017 -B'z In Your Town-.

In celebration of the band's twenty-fifth anniversary in 2008, both songs were again collected together when they were voted by fans onto B'z The Best "ULTRA Treasure", where "Pierrot" was voted to eighteenth and the title song was voted to twenty-fifth. "Yuruginai Mono Hitotsu" was also found on The Best of Detective Conan ~The Movie Themes Collection~ in 2006 and The Best of Detective Conan 3 in 2008. Later, in 2013, it was also found with other era-appropriate singles on B'z The Best XXV 1999-2012.